APRIL 14, 2020:  With support from NoNewSFJails Coalition, Supervisor Sandra Lee Fewer introduced an ordinance at the Board of Supervisors meeting today to close the dilapidated Hall of Justice at 850 Bryant St, which includes the permanent closure of County Jail #4. Supervisors Haney, Ronen, Walton, and Preston endorsed the legislation, and Supervisors Mar and Peskin signed-on at the introduction earlier today, leaving us with one more Supervisor to persuade in order to prevent a potential mayoral veto.

If passed, the ordinance will:

The ordinance is in line with a decision made unanimously by the Board of Supervisors in 2015 to reject funding for a new replacement jail and to create a county work group to investigate alternatives that can close 850 Bryant St by reducing the jail population, expanding alternatives to imprisonment, and investing in community resources. Fewer’s latest ordinance is the first legislation that seeks to implement the spirit of these recommendations.

“There is no better time for this legislation. As more and more people are released from jail to mitigate the spread of COVID-19, it is all the more urgent to shift our priorities to providing housing and healthcare rather than wasting resources to lock people up in jails – which are fundamentally unsafe, unhealthy, and violent. We applaud Supervisor Fewer for taking concrete action to close down the horrid jail at 850 Bryant St, a building that should have been torn down over 20 years ago.”

Now with six supervisors signed on, the ordinance has been assigned to the Government Audit & Oversight (GAO) Committee, where Supervisors Mar, Haney and Peskin will discuss the ordinance and hear public comment before the ordinance comes back to the Board for a final vote.

To help sway Yee or Mandelman in support of the ordinance, and prevent a potential mayoral veto, join our Digital Day of Action TOMORROW, April 15th, as we STORM SOCIAL MEDIA to #ShutDown850 now!

Details and instructions on how to participate on our action page here. 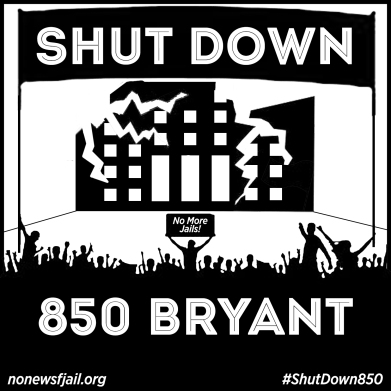