A People’s Victory for Abolition

For the past seven years, you’ve stood with us against jailing and criminalization. You’ve taken a stand for a better, more sustainable and more healthy San Francisco for all residents and communities.

You’ve shown solidarity with caged & criminalized people throughout San Francisco. You’ve gotten your organizations to sign-on to our letters and to mobilize to City Hall numerous times. You even risked arrest in order to demand our city refuses to build a new jail. 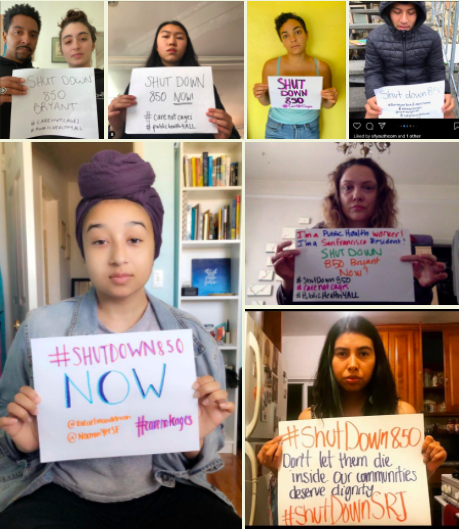 For the past 18 months, you’ve demanded City Hall take action to close 850 permanently, without out-of-county transfers or jail expansion. And you’ve called for the immediate release of people from SF’s jails in order to prevent the spread of COVID19. Together, we are making history. Today, the Board of Supervisors passed Fewer’s ordinance to close 850 Bryant by November 1st, 2020, with a 10 to 1 vote. Right now, SF has a record low number of people locked up inside jail, at around 700, the lowest it’s been since the 1950’s.

Just as you helped us defeat plans for a new jail in 2015, you’ve helped us chip away even further at SF’s oppressive jailing system. Because of you and your bold actions and commitment, we successfully passed this legislation to close a dangerous jail, to ensure that the cages at 850 Bryant are not refilled with people in months to come. If we can prove that no city needs a jail like 850 Bryant — not during the COVID crisis and not ever — then we have shown the world that we do not need cages of any kind for any reason.

From everyone at the No New SF Jail Coalition, and each community targeted by SF jailing and criminalization: Thank You. Thank you for your advocacy, for standing on the right side of history alongside us, for amplifying and empowering people who have been suffocated by oppression, imprisonment, and criminalization.

END_OF_DOCUMENT_TOKEN_TO_BE_REPLACED

On Tuesday, May 12th, SF’s Board of Supervisors will cast their final vote on Fewer’s ordinance to permanently close 850 Bryant by November 1st.

This past Tuesday, May 5th, the Board of Supervisors amended the ordinance in adjusting for Sheriff Miyamoto’s concerns, namely for the Sheriff to be able to continue to use the kitchen and laundry at County Jail (CJ) 4 while renovating CJ2 if CJ2’s renovations are not finished before the November 1st closure of 850 Bryant.

END_OF_DOCUMENT_TOKEN_TO_BE_REPLACED

Yesterday over 200 San Franciscans and Bay Area residents virtually swarmed City Hall yet again in support of Supervisor Fewer’s ordinance to permanently close 850 Bryant once and for all.

The GAO vote was unanimous: 3-0 in favor of our ordinance!

NoNewSFJails worked with Fewer’s office to hold a press conference before the GAO meeting, featuring two speakers–Jose Bernal with Ella Baker Center & SF’s Re-Entry Council and Daniel Mendoza with CURYJ-– both of whom have experience being imprisoned in 850 Bryant before, as well as Alexi Jones, a policy analyst with Prison Policy Initiative.

During the GAO meeting, 22 speakers–including doctors and other healthcare workers, social workers, lawyers, former prisoners, survivors of violence, teachers and educators–called-in to the Committee representing communities across SF’s districts, and over 174 supporters submitted  letters to the Committee’s record, all urging the GAO committee to recommend Fewer’s ordinance to the BOS to close 850 permanently, without out-of-county transfers or other jail expansions.

Among yesterday’s many speakers, NoNewSFJails organizer and CUAV co-director, Lidia Salazar gave a powerful and timely statement on the layers of trauma jailing, criminalization and policing cause, and the need for our city to use community accountability and transformative healing practices instead: