After NoNewSFJails organized over 45 local organizations to sign our letter urging the SF Board of Supervisors to take urgent action in immediately beginning to decarcerate the city’s entire jail system as a public health measure in fighting the spread of COVID-19, Supervisor Sandra Lee Fewer heard our call and began working with our legislative team to craft a plan to close 850 Bryant Permanently. 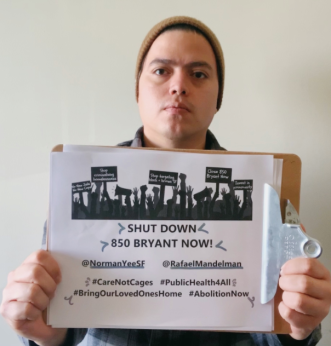 At its introduction, the ordinance was assigned to the Government Audit & Oversight Committee (GAO), where it will undergo committee review and public comment on Thursday April 30, 2020.

County Jail 4 (CJ4), located at 850 Bryant, is a dilapidated and earthquake unsafe building that has been slated for demolition since 1996. The city agrees that CJ4 must be closed, but despite the two decades that have passed since the building was condemned, CJ4 remains open today. Closing the jail is important for the health and safety of the people being held there, as well as those who work there. Most importantly, closing this vestige of the past will present an opportunity to shift city resources in a way that will actually make our communities safer without criminalizing the city’s poor and people of color.

This ordinance is based on a No New SF Jail Coalition proposal that was previously drafted with input from coalition member-organizations and other impacted partners. If passed, the ordinance will require San Francisco to keep the number of people in cages within the county below 1044 people. Under the ordinance, the city cannot achieve this number by transferring people out-of-county or by increasing the number of people on electronic monitoring surveillance. The ordinance will then require the county to close the decrepit and earthquake-unsafe CJ4 by November 1, 2020.

In addition to requiring the long-delayed closure of CJ4, this ordinance prohibits the city from building a new jail.

Who is introducing the ordinance?

What can we do to ensure this ordinance passes?

Our Board of Supervisors and other elected officials need to know that closing CJ4 and halting the caging of human beings is a priority for their constituents and communities. We would like to make sure that the ordinance has at least an 8-Supervisor majority, which will prevent Mayor London Breed from potentially vetoing it. This will require Coalition partners and allies to show their support for the ordinance calling or visiting supervisors, mobilizing members to attend any press conferences and hearings, and using social media to reach out to our Supervisors and bring visibility to the ordinance after it is introduced.

What about community investment and alternatives to jail?

This ordinance does not require the city to invest in community resources or alternatives to jail. However, our Coalition will continue to seek those investments through the budget process and further legislation. We are proposing specific and general community and jail-alternative investments based on the savings from closing CJ4 ($25M+/yr).

4/29 Amendments to the Ordinance, as referenced in 4/30 GAO Committee Hearing:

Revisions to some language of the ordinance

And some changes to the process and terms of closure

What this ordinance mean for people and communities concerned with closing 850 Bryant?

You can read SF Chronicle’s Exclusive on the ordinance here.