Call in and make your voice clear: Community Not Cops! Defund SFPD NOW!

You can find instructions for calling in and sample phone scripts here: bit.ly/nosfpdcash

SF Board of Supervisors’ Rules Committee meeting is on July 9th at 2PM.

Support the charter amendment to remove the minimum staffing requirement and defund & disband the SFPD! In 1994—a time when our country’s politicians labeled Black and Brown children “Super-Predators”— the voters of San Francisco passed a charter amendment to set a minimum police staffing level of 1,971 officers.

The upcoming SF Board of Supervisors’ Rules Committee meeting is our first opportunity to support the charter amendment to remove the minimum staffing requirement, and get it on the ballot in November. Making your voice heard via public comment will only take a few minutes.

RSVP to this event for more information and find the link to suggested talking points here!

Sheriff Paul Miyamoto has now publicly refused to commit that his office will move every single person out of CJ4 by November 1st. This is morally reprehensible and illegal based on the May 12 ordinance to shut down CJ4.

On Tuesday, July 21st at 12pm, the “Safety & Justice Challenge” subcommittee of the Sentencing Commission is having a public meeting, where jail closure will be discussed; public comment should be the first item right at noon. We need to put public pressure on the Sheriff– and the City– to make good on following the bare minimum of the letter of the law: CJ4 must close by November 1. No exceptions.

Instructions for calling in and sample talking points here. 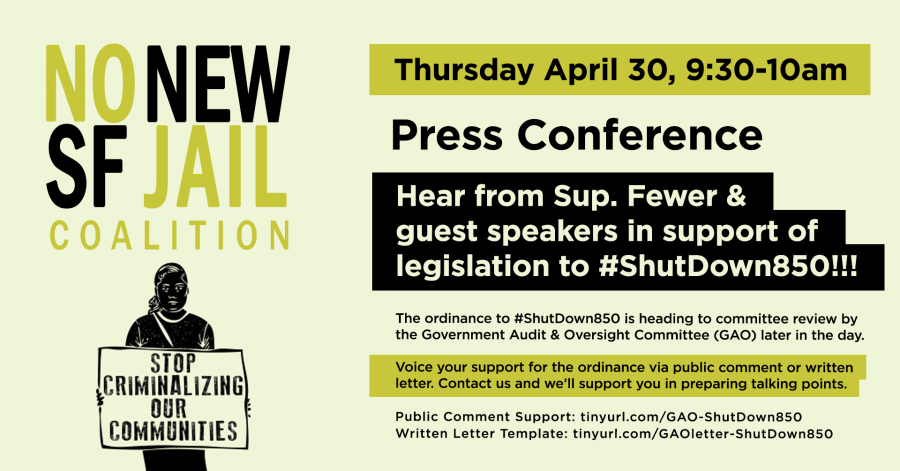 Check out Highlights from our Digital Day of Action here. 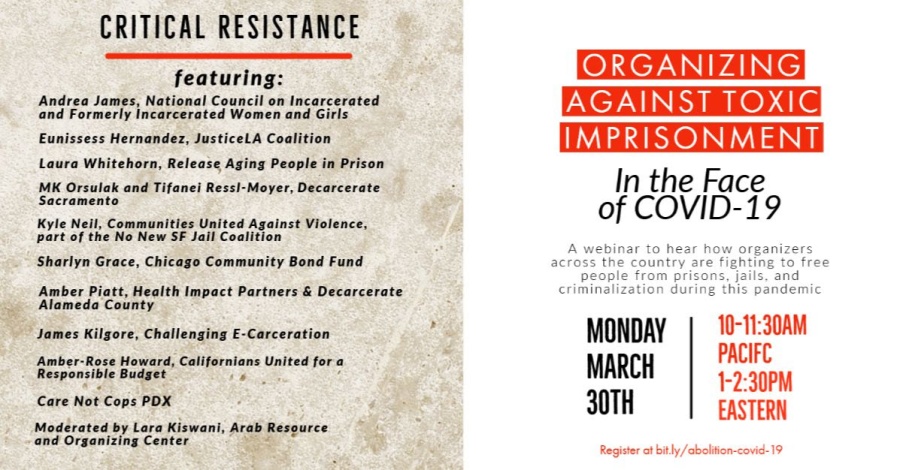 Read about the “Organizing Against Toxic Imprisonment” Webinar NoNewSFJails representatives presented on here.

to Stop Construction of a NEW Jail in SF

Our Petition against Jail Construction in SF

SF County Sheriff Mirkarimi wanted to spend anywhere from $290-$465 million to build a new “replacement jail” in San Francisco County. Nearly 1000 people and 50 organizations signed this Open Letter to the San Francisco Board of Supervisors, saying “We Can’t Afford a New County Jail!”.

Speak Out Wednesday: Last Stand to Stop the New Jail!

There are key events coming up for our fight in December. Will you join us in demanding that the Mayor and the Board of Supervisors halt their rush moves to push through the proposed jail?

Mark your calendars and join us to speak out against the new jail and for community care — Budget and Finance Committee: December 2 at 10 am (Room 250, City Hall)

Check FB event for latest information and to RSVP. 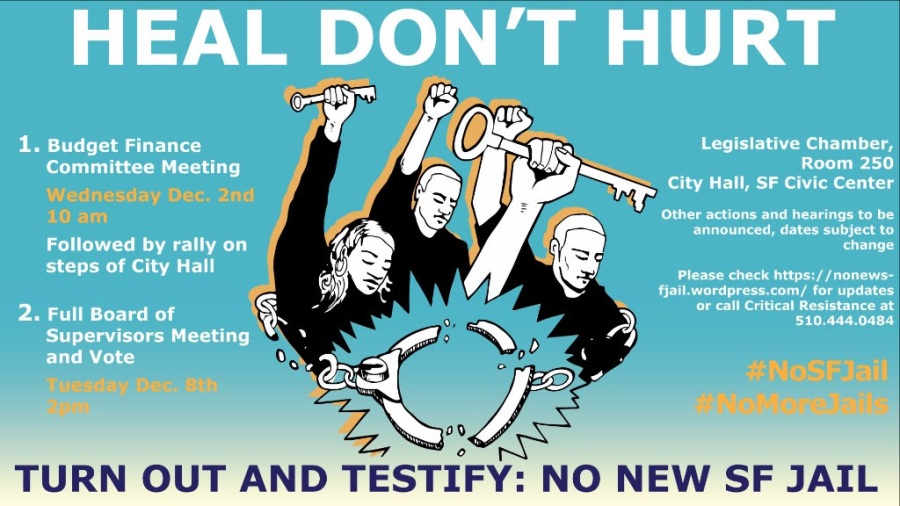 This is absolutely outrageous. We will not stand for this type of deceitful backdoor politics. We will not be silenced and denied the opportunity to testify to the whole Board of Supervisors against the jail! We demand public participation in this process. Join us as we pressure officials to hear us! We need to stop the project now!

10:30 AM — Hearing at the Government Audit & Oversight Committee on ALTERNATIVES to the NEW JAIL! (room to be announced)

Last month, anti-police violence activists and the No New SF Jail Coalition testified to the Board of Supervisors about the racial bias in SFPD and against the new jail. New reports have shown that black women make up 50% of arrests and that black people are 56% of those locked up in SF county jails.

3:00 PM — Board of Supervisors (BOS) Meeting to approve Planning Commission’s Mitigated Negative Declaration to circumvent a full Environmental Impact Report (EIR). The BOS is rushing to apply for $80 million from the state to build new cages. We can’t allow more money to fund jails!

On 6/25, the No New SF Jail Coalition rallied at the hearing on our appeal against the SF Planning Department’s decision to forgo a full EIR DESPITE many clear social and environmental impacts on housing, transportation, and outdoor space for the SOMA community, which is predominately working-class Filipinos.

Our appeal was rejected and the Planning Department’s decision was upheld. The city is rushing through the Environmental Review process because they are applying for state funding from the BSCC for $80 million. We need to show up and make sure that NO MORE MONEY goes to funding cages in San Francisco!

On June 26th, sheriffs gathered in Sacramento for the Board of State and Community Corrections (BSCC) Bidder’s Conference to learn how they can access funding from the state for their jail projects. Members of the coalition mobilized there from counties across California to challenge our respective counties’ bids for jail money and disrupt their meeting. Read more about the conference, and why we traveled to Sacramento to disrupt it, here.

As a result of the appeal we submitted for the Preliminary Mitigated Negative Declaration, the San Francisco Planning Commission held a public hearing at City Hall. We testified to pressure officials to require a full Environmental Impact Report (EIR) for the proposed jail.
Our appeal was rejected and the Planning Department’s decision was upheld. The city is rushing through the Environmental Review process because they are applying for state funding from the BSCC for $80 million. We will continue to show up and make sure that NO MORE MONEY goes to funding cages in San Francisco!

We successfully organized a public hearing on “Alternatives to a Jail Rebuild” at San Francisco City Hall, sponsored by Supervisor Jane Kim and Board President London Breed. Anticipating a postponed hearing, community members powerfully described their opposition to the jail and expressed endless viable alternatives to a rebuild project by taking over the previous agenda item. The passionate testimony directly resulted in Supervisor Eric Mar openly speaking out against the jail rebuild proposal. Supervisor David Campos also flipped his position on the issue.

Our agenda item was rescheduled for July 16th. We will show out again to show the Board of Supervisors that we still don’t want any more money going towards cages instead of our communities!

After the successful takeover of the hearing, we gathered outside City Hall as a strong community in support of alternatives, not a new jail. This was an important day of action where we demonstrated to decision-makers what San Francisco really needs. Read more about what we had planned for our plan for the day of action here.

Together with member and allies’ support we got over 200 public comments submitted against the jail’s insufficient environmental report. We entered the public comments as a part of our appeal, demanding that the San Francisco Planning Department conduct a full Environmental Impact Report, which would allow public comments to be heard more fully and alternatives — including a no-build option — to be assessed.